Hope to see you at the Big Tent where I will be working with my friend Grace Ji-Sun Kim.

I look forwarding to participating at the Big Tent, held at Washington University, St. Louis, July 6 -8th, 2017. I will be co-leading a Workshop with Rev. Mark Koenig, “Disrupting Racism: Building the Intercultural Community” 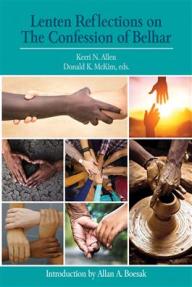 “Brokenness, disunity, and hatred are evident all over the planet. The world needs the witness Belhar calls the church to live out in the world. The church’s primary responsibility is to love God so fully that God’s saving presence shines through her like light in the midst of darkness. The church then becomes a beacon of hope, a lighthouse on the shore of a storm-tossed sea. By confessing, internalizing, and living out the principles of Belhar in her own experience, the church positions herself to become what Henri Nouwen calls, ‘a wounded healer.'”
Mark Lomax
Lenten Reflections on the Confession of Belhar

Christ is risen! Christ’s proclamation that God loves us and Christ’s call to love God and one another provide words of hope in this broken and fearful world.

This Lenten season have used a new resource to explore the Belhar Confession: Lenten Reflections on the Confession of Belhar, edited by Kerri N. Allen and Donald K. McKim. The Presbyterian Church (U.S.A.), in which I serve as a teaching elder (pastor), added the Confession of Belhar to our Book of Confessions in 2016. This confession came from the Dutch Reformed Mission Church during its historic struggle against apartheid in South Africa. I am grateful to Kerri and Donald and all the authors. 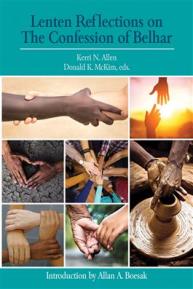 “Jesus calls us all in the church to love one another, a sign by which we are identified as Christ’s disciples. This identifying sign is so important to our witness! Let us use the precious gift of time given in this holy season to lean into Jesus’ teaching and learn more of Jesus’ love, that we may reconcile with one another, even–especially–at the table.”
Cynthia Holder Rich
Lenten Reflections on the Confession of Belhar 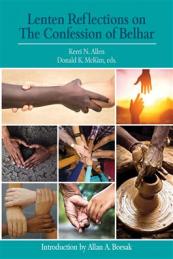 “By faith we connect the action of restoration to God’s work through Jesus. By experience, we note that one cannot restore a right relationship that never existed (that is many experiences of women, people of color, LGBT folks, youth, differently abled, immigrant, poor, differently political, and others). Now that we are beginning to recognize through the Belhar Confession that all is not, and has not been ‘right,’ how will I/you/we commit to thinking differently.

“The Greek verb katallasso (‘reconconcile’) could also be translate as ‘to change’ (for example, a course of action.”
Eric A. Thomas
Lenten Reflections on the Confession of Belhar

What will we change? What will I change? To use Eric’s words (with a parenthetical addition): “How will we (I) create new ways of restoration, partnership, advocacy, and welcome?”

Thanks to Hyeyoung Lee and Kurt Esslinger for sharing this prayer for peace, reconciliation, and reunification on the Korean Peninsula.

Today is Liberation Day on the Korean Peninsula. May they be liberated from division and war. Let us pray the prayer composed together by Christians in the North and in the South:

It has been 25 years since we agreed to keep the week of Independence Day as a joint prayer week with the wish of reconciliation, and peace and reunification of the Korean Peninsula. It was a promise from the South and North Korean churches’ deep prayer to God for peace and reunification and was a vow of love in a very difficult time. We, however, still have not reached full liberation and still are experiencing conflict and hostile policies. Oh Lord! Have mercy on us.

God of the Road!

You know our suffering and pain at the division of our people. Lord, the road of reconciliation and peace, created by the life and devotion of…

Thanks to my friend and colleague Irv Porter who pointed me to Dakota 38, a video about the Dakota Wokiksuye Memorial Ride remembering the 38 Dakota men hung in Mankato after the U.S.-Dakota War and working for healing and reconciliation. Check it out!

A prayer for South Sudan

An earlier post focused on participating in a National Day of Prayer with the people of South Sudan in response to the violence that has plagued their country since independence and that continues to tear at the fabric of society and the people. Here’s a prayer that I wrote for that day:

God of grace, God of justice, God of peace,
you create us to live together,
to honor and respect one another.
Hear us as we pray for South Sudan.

With our sisters and brothers,
we give thanks as they celebrate their independence.

With our brothers and sisters,
we pray for your presence and guidance
as they seek to live together.

Comfort all who mourn the death or injury of loved ones.
Keep safe the Reverend Idris Joshua Idris Nalos and Pastor Trainee David Gayin and all who are detained and their families.
Speed the day when they will be released.

Protect the women who are targets of sexual violence
the children and the most vulnerable.

Grant all your children
the grace to see each other as sisters and brothers
and the courage to turn from violence and  break cycles of vengeance.

Renew within the leaders of South Sudan
the vision for a just and peaceful country
that leads to the wisdom to govern wisely.

Provide the leaders and peoples of South Sudan with
strength to work for justice for all;
passion to seek reconciliation and peace;
and all that is needed for the living of these days.

God of grace, God of justice, God of peace,
you create us to live together,
to honor and respect one another.
Bless South Sudan and her people,
we pray in Jesus’ name. Amen.

National Day of Prayer for Reconciliation in South Sudan

Please join the people of South Sudan in prayer for reconciliation in their country.

A National Day of Prayer for Reconciliation in South Sudan will take place on Monday, July 8, 2013, the eve of the anniversary of the country’s independence. Since achieving independence, South Sudan has continued to know conflict: conflict on the border regions with Sudan, conflict between the peoples of South Sudan.

In response to the violence, comes this call for prayer and a plan for the people of the country to pray together. The theme will be lamentation, leading to repentance and personal conversion/transformation. From July 1-7, there will be prayers with different groups (e.g. government, organised forces, women, youth, etc).

On Friday, July 5 the Muslims will take up the prayer in their mosques, and on Sunday, July 7 the Christians will take it up in their churches.

On Monday, July 8, a national time of prayer will be held in the Juba Stadium, and prayer will also take place in each State capital.

The initiative grows out of an awareness of the need for reconciliation in the Republic of South Sudan. H. E. Vice President Riek Machar raised this concern and H. E. President Salva Kiir appointed a Committee for National Healing, Peace and Reconciliation.
Archbishop Daniel Deng Bul of the Episcopal Church of Sudan chairs the committee with Bishop Emeritus Paride Taban of the Roman Catholic Churchas Vice-chair. The Committee includes a number of other Christian and Muslim religious leaders, a representative of each state, and representatives from civil society.

Learn about Presbyterians at work with our sisters and brothers in South Sudan.

Pray between now and July 8.

May God lead the people of South Sudan to justice, peace, and reconciliation.

A call to prayer for Nelson Mandela

Nelson Mandela, child of God, lies  ill in a South African hospital. The Council for a Parliament of the World’s Religions has issued a call to prayer for Nelson Mandela.

In the words of the Council, Nelson Mandela:

helped a generation of young people find a voice for justice. He believed in the humanity of the other to the extent of engaging his own captors in conversations. He transformed an armed movement into a peaceful victory. He successfully established a process of forgiveness and reconciliation instead of revenge.

In our own fashion, each of us may pray.

Check out this movie that my friends at the Center at West Park will screen.

The Center at West Park The Second Meeting follows Lt. Col Zelko’s journey back to Serbia to meet Col. Dani, 12 years after the first meeting of the pilot and missile officer who commanded the Yugoslav missile battery that shot down Zelko’s F117A Stealth fighter in 1999. “I had the remarkable opportunity to have a second chance at experiencing Serbia and her people and I will forever be deeply grateful, enriched, and blessed by it,” said Lt. Col Zelko of the experience.

The advanced screening will be the first showing…