I sent a fax tonight to the State Board of Pardons and Paroles in Georgia. I wrote on behalf of Marcus Ray Johnson. The state has scheduled his execution next Wednesday. He was convicted of raping and murdering Angela Sizemore. His advocates indicate there are reasons to doubt his guilt. Even if there are not, I would still have sent a fax. I do not believe that putting someone to death is the answer. It is an act that tears the soul of society. It inflicts further wounds. As much as we may feast on the act, we are feasting on ourselves. I grieve for Ms. Sizemore; I tremble at what was done to her – an unspeakable violation. I grieve for those who love her. Yet, killing the person convicted of this crime is not the answer.

I sent an email tonight to the Iranian Embassy. I wrote on behalf of Youcef (or Yousef) Nadarkhani. Pastor Nadarkhani stands convicted of apostasy. CNN reports that he heads “a network of Christian house churches in Iran” and “could be executed as soon as midnight Wednesday in Tehran for refusing to recant his religious beliefs and convert to Islam.” Iran has ratified the International Covenant on Civil and Political Rights. Article 18 of the covenant includes a provision that the “freedom to have or to adopt a religion or belief.” On this basis, Iran should halt the execution. But even without the Covenant, capital punishment remains an unacceptable response in this or any situation.

I faxed. I emailed. Will you join me?

A movement caught my eye.

I sat at the kitchen table in Cleveland Heights, working on one of the presentations I will make in Wooster this weekend.

The blur of dusky brown drew my attention from the computer. Deer appear regularly at the Erie Shire; more regularly than I do.

On this late afternoon, three doe (yes, only two appear in this picture) grazed the buffet of flora that our back yard offers. Not wanting to frighten them, I took pictures through the window.

Did she hear the shutter? I find it hard to believe, but doe closest to the window turned when she I took the first picture. It appeared to me that she gazed through the window, staring at me, posing the question, “Just who belongs, and who is the visitor here?”

Execution set for September 28 in Florida

As officer Pena’s daughter noted, her father gave his life doing his job. I give thanks for his service and mourn his death. My prayers are with his family and friends.

But killing Manuel Valle will not bring officer Pena back. It will be an act of revenge. It will further tear and wound our society.

The death of any person diminishes us all. Many deaths cannot be prevented. Deaths that result from state executions can.

For these reasons, I pray for Manuel Valle and all who mourn for him.

And I have contacted Governor Rick Scott. I invite you to do so as well:

I watched a movie tonight. Well watched might be too strong a word.

I had a movie playing while I worked on the computer. It was diverting enough although not so engaging that it distracted my attention.

My movie watching goes through phases. An actor, an actress, a director. Something or usually someone catches my fancy, who knows why, and I place a number of that person’s films in the good old Netflix queue.

At the moment it is Errol Flynn. Obtaining one of his pirate films brought the opportunity to order a disk with two movies. Thus I watched Buccaneer’s Girl tonight. Well watched might be too strong a word, although we have been there before.

The plot of the film failed to catch my attention, but I did notice the setting: New Orleans. Of course there were very few scenes, if any,  that actually showed the city. Most were interior shots and scenes set on a boat aboard the bounding main. I did have the feeling that I had seen some of the players other movies, although I could not confirm that quickly on IMDB. But they said the name New Orleans frequently enough to piqué my interest, for that reminded me of the last time I visited the city.

At Christmas, 2009, we went to the Crescent City with Tricia’s family. It was a wonderful vacation. We did some rebuilding, ate way too well and way too much, watched a football game on Bourbon Street, saw the lights at New Orleans City Park, checked out Jan Lafitte National Historical Park and Preserve and the New Orleans Jazz National Historical Park. We ate multiple beignets and drank much coffee and hot chocolate on several trips to Cafe du Monde.

More than that, it was a wonderful, wonderful time with family. The memories comfort me still.

The Steelers are at halftime.
They started well
but pretty much self-destructed over the last few minutes of the first half.

They now trail
and they have to kick off to begin the second half.
The good news is that they have played better on defense.

At any rate,
As the half came to an end,
I decided to do something other than overeating.

It appears easy enough.
At least it worked this time well enough.

The picture dates from October 19, 2009
during a break in an event at
George Fox University
in Newberg, Oregon.

Life happens in between

we make our way,
we journey,
we live.

As so often happens,
when I looked through my pictures this evening,
I came across pictures of Ghost Ranch.
A picture of “Georgia O’Keefe’s mountain” spoke to me.
The colors and the time of year, I think.
This was taken in October of 2009.

For some reason, I played with the picture using iPhoto.
I suspect that with a better program I could have preserved some of the texture in the foreground.
Still, it is an intriguing view. 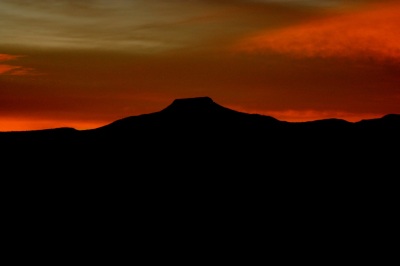 The third execution this week in the United States took place today.

Prayers for the family and friends of Derrick O’Neal Mason, executed today by the state of Alabama.

Prayers for the family and friends of Angela Cagle of whose murder he was convicted.

I made a contribution to the National Coalition to Abolish the Death Penalty. You can too.


See you along the Trail.

Not only Southern trees

As I type, I understand that the execution of Troy Anthony Davis is proceeding. If it is not, it will soon. He was convicted for the murder of Mark MacPhail.

Human Rights Watch reports that half a world away, 17-year old Alireza Mollasoltani was publicly executed in Iran. He was convicted for the murder of Ruholla Dadashi.

My heart aches for the family and all who love Mark MacPhail.

My heart aches for the family and all who love James Byrd, Jr.

My heart aches for the family and all who love Ruhollah Dadashi.

My heart aches for the family and all who love Troy Anthony Davis.

My heart aches for the family and all who love Lawrence Russell Brewer.

My heart aches for the family and all who love Alireza Mollasoltani.

In the midst of the sorrow, I give thanks for the glimpses of grace shown by family members, friends, and advocates.

Not only Southern trees.

Is this how we want to mark the International Day of Peace?

Without an intervention of some sort, Troy Davis will be executed by the State of Georgia tomorrow – September 21 on the International Day of Peace at 7:00 p.m.

I do not believe in the death penalty. I do not think it makes us safer. It does not bring anyone back. It rips the fabric of society – causing more wounds rather than working healing and restoration. It is rooted in vengeance – a lethal concoction of drugs injected into one’s veins in exchange for murder or rape or other capital crime. Such crimes are heinous. Monstrous. Evil. Unspeakably so. But there has to be another way, other ways, to respond than execution. As my friend Shannon points out, are the countries that use the death penalty really the company I want my country to keep?

All that aside, there is also the question of doubt in the case of Troy Davis. He was convicted, but since then: seven of the nine original witnesses have recanted or changed their testimony; many of these witnesses have stated in sworn affidavits that they were pressured or coerced by police into testifying or signing statements. Courts have ruled that Troy Davis’ innocence cannot be proved. But when does doubt reach the level of being “reasonable?” Does that level change after a person is convicted? Should the fact that the punishment is death affect what constitutes “reasonable doubt?” Does proving innocence trump reasonable doubt after conviction?

Amnesty International also provides an opportunity to contact the Georgia State Board of Pardon and Paroles.

I have taken both of those actions. In addition, I plan to fast tomorrow evening. And I will pray.

I will pray for Troy Davis and his family and friends.

I will pray for the family and friends of Savannah Police Officer Mark Allen MacPhail. Officer MacPhail’s brutal murder was the crime of which Troy Davis was convicted.

I will pray for those who are in a position to stop this execution.

I will pray for those who are in the position of having to carry out this execution should it come to that.

I will pray for all people who have had a loved one murdered.

I will pray for all people who have had a loved one executed.

May God have mercy on us all.