Sometimes I fail to have even a glimmer of what it is I want to understand.

But sometimes … sometimes … understanding comes in a surprising flash of insight that almost carries a physical impact.

I have started an effort at self-care. Again. I have lost track years ago of how many times I have been down this path.

It involves a change in my food choices, a reduction in the amount I consume, and an increase in activity. This marks the third day. I did not walk as much as I want because of allergy issues, but other than that, all has gone well … until about an hour or so ago.

Cravings for chocolate and chips and crackers and cookies and all sorts of other junk food filled my head. I exchanged some text messages with a friend and that helped. I stayed home and did not wander over to the all too convenient convenience store to buy enough junk food to put the owner’s children through college. Still I felt hungry. To be more precise, I felt that I felt hungry.

Before I could leave, understanding came upon me in an instant.

I had the Steelers game on my computer; I had the BYU – Washington State game on the television.

When I watch football or when I listen to football or when I do both at the same time, I eat. I eat not because I am hungry but because eating is what I do when following football. All those parties and gatherings through the years have taught me that when the game is on, so is the feed bag.

Tonight that insight has helped me refrain from mindless overeating. Hopefully that insight will serve me will throughout this year’s football season.

In person once again

Plans for a fall trip to New Mexico and Ghost Ranch fell apart yesterday as I realized I had failed to read my calendar properly. I am deeply disappointed that things have gone awry. This will be the first year in a while that I have not made such a trip. I had already begun to pencil in an itinerary that included attending a Menaul School football game. After spending a few days in Colorado, I realized anew how much that part of the country feeds my spirit and nurtures my soul. But this year, it is not to be.

Disappointed as I am, I recognize that this “problem”  fails to amount to a hill of beans in this broken and battered world. After a primal scream of sorts, where I acknowledged my privilege, I have begun making plans – plans for what I will do in the New York city area during those days – and plans to increase the likelihood that next year, I will view this in person once again: 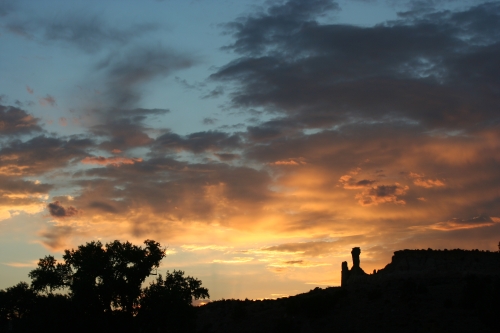 Assuming I have read my calendar correctly this time and assuming I can make the plans come together, my alternatives for the fall should result in a fairly significant, in the extremely privileged,  not amounting to a hill of beans sense of significance, announcement late in October or early in November.

No time machine here,
simply found the time to sort
through folders where additional pictures
were discovered.

While visiting Eric,
during the days he attended
Hawai’i Pacific University,
when he went to class,
I took the opportunity to visit the zoo.

I give thanks for those who pray for the Presbyterian Ministry at the United Nations and for me. Each of the past two days included an event that reminded me of the power of those prayers.

Today, 26 August, I attended worship at Wellshire Presbyterian Church in Denver. I had the opportunity to speak briefly about the Presbyterian Ministry at the United Nations during the worship service. A potluck followed worship. There I spoke directly to a number of the members. Before either of those events took place, the Rev. Dr. Pattie Kitchen led the congregation in the pastoral prayer for the morning. She prayed for me – by name – and for the Presbyterian Ministry at the United Nations.

On 23 – 25 August, I took part in the Malawi Mission Network meeting. Again I had the opportunity to speak to the whole network and to have many wonderful conversations with individuals or small groups. I reconnected with some friends that I have known, including Mark and Lin Plumb from my college days. I made many new friends, including Mary Mphande, Helen Zimba, and Mercy Nyirenda who helped me don the chitenge that I won as a door prize.

Saturday evening, we gathered in the outside amphitheater at the Highlands Presbyterian Camp & Retreat Center. Our partners from Malawi, Presbyterian Church (U.S.A.) Mission Co-workers serving in Malawi, and staff members serving with the Presbyterian Mission Agency sat in the front rows. As a campfire flickered before us, network members stood around us, laid hands on us, and prayed for us.

Each experience moved me deeply, providing touching reminders of the power of prayer and the grace of community. Twice blessed, I give thanks and will remember these moments in the days to come.

My new friend Kathy Bernard took the photo of the group for whom the Malawi Mission Network prayed.

Bob Ellis took us outside for his presentation at the
Highlands Presbyterian Camp & Retreat Center.

Not a bad view.
For some reason, Bob didn’t appear in my picture.

Chitenge on a dare

I am attending the meeting of the Presbyterian Church (U.S.A.)’s Malawi Mission Network at the Highlands Presbyterian Camp and Retreat Center in Allenspark, CO.

Last night (23 August), the opening night of the meeting, I went to the Malawi 101 session. There I won a door prize: a chitenge (also spelled chitenje).

My friend Amanda Craft wrote a reflection about the role of the chitenje when we were on a travel study seminar together. It was for the old blog of the Presbyterian Peacemaking Program so it does not show Amanda as the author. She wrote it. I watched her.

The contest involved our birthdays. The person with their birthday closest to last night (23 August) was to win. With a date of one month and one day away, I won.

Amid the laughter came the dare: you should wear this tomorrow (24 August) when you do your presentation on the Presbyterian Ministry at the United Nations.

Far be it from me to pass on a dare.

As my presentation began at 10:00 AM Central Time, Mary Mphande, Helen Zimba, and Mercy Nyirenda helped me don the chitenge. Kathy Bernard graciously took the picture.

And the rest is history.

Many of the churches where I preach do not have a coffee hour after the service. They have a meal. A really good meal.

For example, on Sunday 19 August, after the service ended, the saints of Good-Shepherd-Faith Presbyterian Church retired from the chapel where we worshiped to gather again in the Fellowship Hall.

There, after saying grace, we dined on:

And it was good. Very, very good.

Ideas swirl through his mind,
thoughts career,
snippets of conversations,
fragments of emails,
shadows of intentions,
vaguely misremembered promises,
each representing
a task,
a responsibility,
something to do.

As though propelled by
some force unseen
they crash, collide,
then fly away to disappear
leaving chaos in their wake,
increasing anxiety,
provoking paralysis.

He struggles to slow their frenzy
that he might pluck them
one by one from the maelström to
name them,
ponder them,
weigh them,
value them,
in order that he might strip them
of their power to intimidate
and herd them into
some coherent, prioritized order
upon which he will act.

On 19 August, as the congregation of Good Shepherd-Faith Presbyterian Church in New York City stood to sing hymns, I lowered my voice so that I could listen. Sometimes when I visit a congregation that happens because I do not know the song. But not on that morning.

On some Sundays, two worship services take place at Good Shepherd-Faith: one in Korean, one in English. It is possible, maybe even probable, that at least some individuals attend both services. They are held at different times and the community members know each other well. But some Sundays, two services occur.

Twice a month that changes. The community worships together. One service. Two languages. The bulletin contains the words of the service printed in Korean and printed in English. Some of those in attendance can understand, speak, and read both languages. But I cannot.

In some parts of the service, only one language is used aloud. One scripture lesson is read in Korean, one in English. A pastoral prayer is led in English, a second pastoral prayer is prayed in Korean. The sermon is preached in English. A Korean translation follows. That proves a bit of a challenge for the person who is translating when the preacher, no names please, tends to view a manuscript as something of a guide than a word-for-word record of what to say. The announcements follow this pattern. Made in English, they are then translated into Korean. In some parts of the service, one language is used at a time. But in other parts, particularly the hymns, both languages are used at the same time.

The lay leader announces the hymn. The community turns to the page in the Korean-English hymnal. The pianist begins and when the introduction ends, the singing begins. Some sing in English. Some in Korean. Some switch flawlessly between the two languages. Each person singing in the language she or he prefers. Hears may say this results in a chaotic cacophony. But for me, each song marks a Pentecost moment – a foretaste of when all peoples gather in that great choir and every tongue sings in every tongue.

And I lower my voice so that I can sing, listen, and smile all at the same time.