The tour has visited a number of churches but I have neglected to take photos.

On 3 December, I preached at the First Presbyterian Church of Whitestone. In keeping with their ministry addressing violence against women, church members made orange t-shirts and hung them in a tree to witness to their neighbors and those who pass by. I made one too.

Orange Your Neighbourhood – End Violence against Women and Girls Now 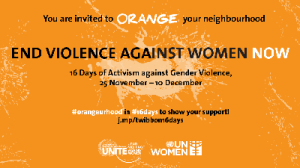 As part of  the online campaign for the 16 Days, UN Women’s Civil Society invites everyone to join in the effort and orange their social media accounts. It’s quite simple – you can show your support and orange your Twitter and Facebook profile pictures by adding an orange Twibbon filter.

Could consider adding the Twibbon filter to your organization’s and/or personal profile picture any time between 25 November and 10 December to raise awareness on ending violence against women and girls. We can join the conversation on social media through the hashtags #orangeurhood and #16days, and are welcome to use any of the suggested messages and images available in UN Women’s social media package.

Learn more about the PC(USA)’s initiative to end violence against women and girls.

Presbyterians against Domestic Violence provides a number of liturgical and resources to address domestic violence.

Presbyterian Women offers suggestions for actions to end violence against women and girls year round.

Get in the swim … or the walk

Last summer, I took part in the CongoSwim, I did not swim. I walked. On a warm, sunny Louisville day, I walked 22,000 steps. 1,000 steps for each mile across Lake Tahoe where the organizers swam.
Participants and donors made it possible for five women and youth-led groups in the DR Congo to receive grants. The Who We Support page contains information about the work the groups are doing for lasting peace and a future free of violence against women and children.
A CongoSwim will take place again this summer. I will take part. I will walk again. I have not determined how far or where or when, but I will walk.
I invite you to show your support this summer by doing at least one of the following:

Get in the swim … or the walk … or support the effort in some other way. 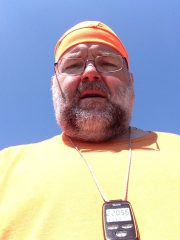 I celebrated this Orange Day by walking 22,000 steps in support of the CongoSwim initiative to funds to address sexual violence in the Democratic Republic of Congo.

It is not too late for you to: wear orange today, act to end violence against women and girls, and to give to CongoSwim.

Today I wear orange and I walk

I wear orange today to call for an end to violence against women and girls.

I will walk 22,000 steps today to support the efforts of CongoSwim to bring an end to sexual violence in the Democratic Republic of Congo.

I invite you to make a financial gift to support this effort. 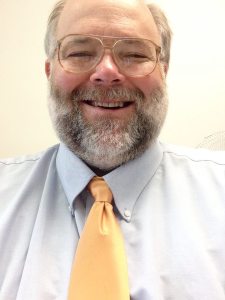 UN Secretary-General Ban Ki-moon’s UNiTE to End Violence against Women campaign invites us to celebrate the 25th of every month as an Orange Day – a day to witness and work for an end to violence against women and girls.

This month the focus is on making cyberspace safe space for women and girls.

A tweetup will take place at 11:00 AM Eastern time with the hashtag #orangeday.

I am in – spreading the word and wearing my orange tie.

Yesterday I signed up to take part in the CongoSwim. Held on August 25, a UN Orange Day to witness and work to end violence against women, CongoSwim will raise awareness about violence in the Democratic Republic of Congo, particularly against women. The event will also raise funds to care for the victims of violence and to help prevent future violence.

Swimmers across the nation are joining CongoSwim 2013, a collective call to action to break the silence about the deadliest conflict in the world since World War II and the worst humanitarian crisis of our time by sending a WAVE of Love to people of the Democratic Republic of Congo.

CongoSwim 2013 will take place worldwide on August 25 when swimmers and ‘not yet swimmers’ will swim in solidarity with Congolese working for peace and stability in the heart of Africa.

Coco Ramazani is a young survivor of systematic rape in eastern Congo whose horrific story is told in Tell This to My Mother by Joseph E Mwantuali.  To mark the global event to spotlight how soldiers are ordered to rape women and children to destroy communities in the scramble for Congo’s resources, Coco will take part in a healing ceremony on the pilot boat while CongoSwim founder Keris Dahlkamp strives to swim 22 miles across Lake Tahoe, expected to take him 12-14 hours.  Rape as a weapon of war has been used around the world throughout history, yet an overwhelming silence remains.

International model Noella Coursaris Musunka, founder of The Georges Malaika School for Girls in Kalebuka, southeast Congo will host a party with the students in solidarity on August 25.  Nunu Kidane, the Director of Priority Africa Network, who was recognized as a “Champion of Change” by the White House, will be swimming in the San Francisco Bay Area. Kidane says:

“I’m coordinating a swim with members of my local YMCA because what has been happening in eastern Congo is similar to what happened in the Holocaust, protracted over many years. Little attention has been paid and few are asking why. As in the past, when the full scale of the reality is finally revealed, many will ask ‘how can this be? I did not know.’ We all need to be involved for our common and shared humanity.“

Join Charles Chapman of New York, the first African-American to swim the English Channel, along with various Girl Scout troops, college super swimmers and senior citizens who have registered unique swim actions to take place in their communities on August 25.  Families are encouraged to register their child’s swim lessons or participation on a swim team with CongoSwim. This unique and inspiring collective swim was organized by volunteers in observance of Orange Day, a call to action by the United Nations UNiTE campaign to end violence against women and girls.

There is no registration fee, but participants are encouraged to raise funds for the Congolese grassroots groups receiving grants from Global Fund for Women and Friends of the Congo.  A portion of the funds raised will also benefit the USA Swimming Foundation’s Make a Splash initiative, to prevent children from drowning in the US.  Upon registering, participants receive a Swim Pack with sample fundraising letters, facts about the Congo as well as tips for talking with children about injustice.

The ingenuity, vision and resiliency of the people are far greater than the mineral wealth of Congo. Thousands of Congolese women and youth leaders are organizing a movement denouncing violence and bringing solutions to national and world leaders. In solidarity with this movement, CongoSwim 2013 uses swimming as a vehicle to raise consciousness and support for the worldwide movement for a peaceful, just and dignified Congo.

Watch for more about how and why I will participate later. For now, think about taking part yourself. 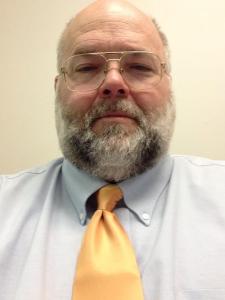 Today, January 25, and the 25th of each month, is an Orange Day – a day to witness and work for an end to violence against women and girls.

Seriously? The House failed to do what?

The U.S. House of Representatives – primarily the Republicans in the U.S. House of Representatives – failed to reauthorize the Violence Against Women Act. The Senate approved reauthorization in a bipartisan vote. The House – the Republicans in the House – let the law expire. Apparently the new version is too supportive of immigrants, the LGBT community, and Native Americans.

For the first time since 1994, the Violence Against Women Act is no more. And state and local governments will receive far fewer resources to address sexual and domestic violence.

It can sometimes be said that laws are not renewed because they are no longer needed. That does not work here.

An effort to revive the Violence Against Women Act can begin in the new Congress. Anyone who loves, or who has ever loved, a woman needs to be part of that effort. 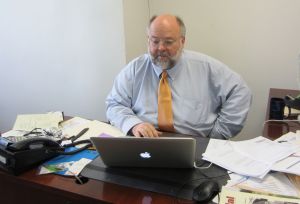 Today – and the 25th of every month – my tie is orange. I wear it to state my commitment to ending violence against women and girls. It reminds me to take actions toward that goal as well.

The 25th of every month is an Orange Day to end violence against women and girls. 25 October is the  fourth Orange Day.

On the 25th of each month, join the UN Secretary-General’s UNiTE to End Violence against Women campaign and orange your day! Check out the Facebook album to see how others took action last month. Here are some things you can do on Orange Day.

Of course working to end violence against women and girls is not a task for one day a month. Orange Days provide a reminder that, in Christ, we are called and freed to love one another and to pursue justice for all – each day and every day.