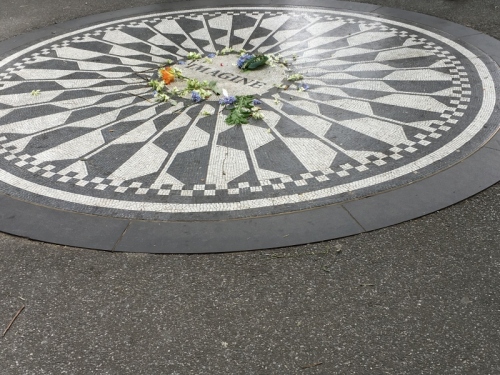 Why I like New York 32: the wonder of Central Park 2

It started as a walk.

It became a quest.

It ended in success.

I preached this morning at the United Presbyterian Church of Ozone Park. Upon my return to the Shire near the Hudson, I faced a decision about what to do with the afternoon. Several options lay before me: work, a nap, or a walk in Central Park, my second favorite place, after the Shire, in New York.

My original thought was to visit the park, but I felt tired and sluggish so I opted for the nap. Except, I could not fall asleep. I decided to go with Plan A. 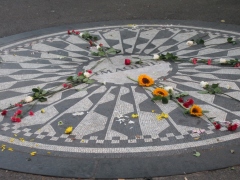 I entered the park at the Frederick Douglass Circle gate and made my way across to Harlem Meer. Then I turned south. I decided I would walk down to see Strawberry Fields before I exited. I watched an inning of softball and then an inning of baseball. The more I walked, the better I felt.

And the walk morphed into a quest.

And shortly after I left Central Park, the pedometer topped 20,000. It stands at 21,412; I may take a few more steps before the night ends. Success. 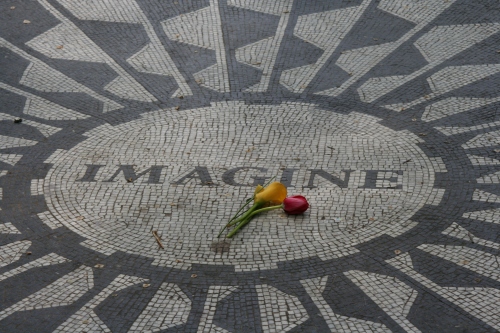 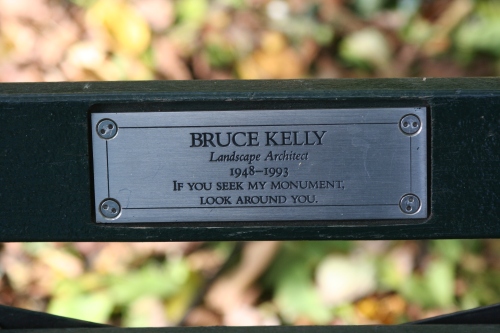 It was an intense hour. Tears rimmed my eyes most of the time, once they slipped out. This evening, I took part in a candlelight vigil.

We lit candles and kept them lit in the wind – together. We remembered the children and adults dead in Newton, Connecticut. We remembered our neighbors in New York and other places. And we rededicated ourselves to working to end the gun violence that haunts our country.

Social media brought the word … at least to me.

Rutgers Presbyterian Church posted the announcement on their Facebook page: a candlelight vigil would take place at 5:00 P.M. at the corner of West 86th Street and West End Avenue to honor the memory of yesterday’s victims in Newtown, Connecticut, the victims in the shooting in Portland, Oregon earlier this week and the memory of all victims of gun violence. The vigil would also provide an opportunity for participants to rededicate themselves to working for an end to such violence. 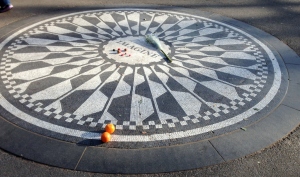 I read the post in Strawberry Fields – and decided I had to be there.

Arriving a few minutes early, I discovered a group gathering at the Church of St. Paul and St. Andrew which stands on the corner. Many people brought their own candles. Because some had brought candles to share, those of us who had not brought our own were given a candle.

The number of participants increased – people of diverse ages, races, and faiths. Shortly before the appointed hour, we lit our candles and assembled on the steps of the church.

Opening words were shared, the host pastor  welcomed the group and articulated his vision of a country and a culture where we have greatly diminished violence in general, and gun violence in particular. Individuals shared their pain for the people of Newtown, of New York City, and of all places whose lives have been seared and forever altered by gun violence. Linda Rosenthal, New York State Assembly Member for the district, spoke, noting that this event marked a beginning and that she intends to help the community engage in conversation and action to end gun violence in our city and country.

As participants engaged in the hope expressing, hope sustaining communal activity of keeping our candles lit in the wind, we voiced further concerns and hopes. We prayed additional prayers. We identified ideas for actions:

Near the end of “Down by the Riverside,” as we pledged to study war no more, I looked across our group and saw a mother tenderly kiss one of her children, then her other child. Tears slid down my cheeks.

With the promise that we would continue what had just begun – and the announcement of the Facebook pages where next steps will be posted – the event ended. We stood together for a while. Then we went our separate ways.

The brief hour soothed my angry, aching soul. But it did not comfort me. And I will act.

Tricia chose to spend a couple of days in New York before returning to Cleveland – in part to take advantage of the Tuesday air fares. We spent the day seeing some of the city and hanging with friends. 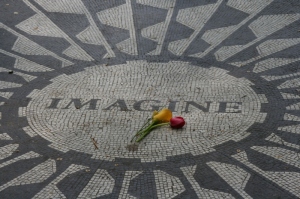 The day began with a walk-by of the apartment where our son will live when he soon moves to New York. Then we walked to Central Park where, as an acoustic guitar gently played, we viewed Strawberry Fields. We journeyed through the park to the Central Park Zoo which proved a challenge to find, which seemed odd considering how big it is. After the zoo, we made our way to the 9/11 Memorial Area. We had no tickets, so we simply walked by the outside.

Headed back uptown, we stopped for dinner at Vnyl in Hell’s Kitchen. Then on to Max Caffe where a number of good folks joined us for conversation, food and drink, and the simple joy of being together.

A day to remember, to learn, to mourn, and to give thanks. A good day.