I always enjoy recognizing places I know in movies, particularly when it surprises me. It brings back memories and makes connections with people and places. A recently viewed movie became much more enjoyable when I spotted Pedernal in the background.

This morning, I finished watching The Quare Fellow, an adaptation of Brendan Behan‘s play. It presents a critique of thedeath penalty as it focuses on two pending execution.

The character subje ct to execution is not named or seen, except with a hood over his head at the hanging. The crime remains unnamed.

As a death penalty opponent, who has not been active enough lately, I appreciate that. My opposition is to the death penalty – to the state taking a life. My opposition depends neither on the person nor the certainty of guilt nor the crime for which the person is convicted, many of which are truly horrific. I grieve for those killed and violated in the crime. But executing the criminal demeans society. Execution is the issue.

Given such a topic, the movie is bleak and somber.

I recognized a filming location as Kilmainham Gaol. Kilmainham has a painful, tragic, troubling history. It is a place of defiance and resistance. All that washed over me this morning. 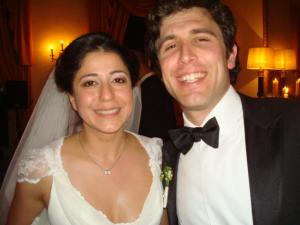 But so did the memory of visiting Kilmainham with Tricia and Bruce and Nancy when we were in Dublin for the wedding of Joel and Roja. And the connections to my family and friends warmed me. (And yes, I realize celluloid is not used much anymore.) 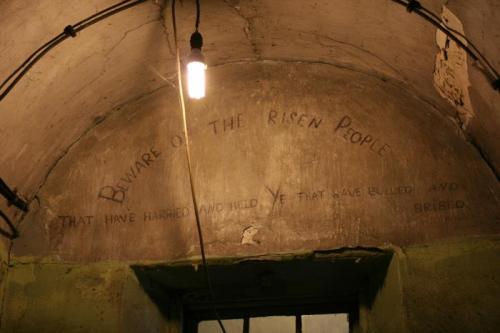 On the ride back to the hotel from the Henna Night Party for Joel and Roja last year in Dublin, the cab driver pointed out the window and said, “There’s the Five Lamps.”

We looked and sure enough, there stood a lamp-post with five lanterns. One of us asked about why the lamp-post had significance.

The cab driver said, “Because it has five lamps.” A true answer, but somewhat obvious.

We asked again and he replied, “It is the only one in Dublin.” Not so obvious, but hardly a significant increase in information.

We tried once more and learned no more. I for one gave up. It was dark so I did not get a photo. I guess that is a reason to return.

Tonight, because the 1 Train was crowded, I opted to walk part way home. On Broadway, where I have been before, I noticed the Five Lamps Tavern.

I figure there is a connection. Some Internet searching has proven about as helpful as our Dublin cabbie.

However, from the Dublin City Libraries, I have learned about the lamp-post in Dublin:

The Five Lamps were put up around 1880 as a memorial to General Henry Hall from Galway who had served with the British Army in India. They were originally a water fountain with four basins at their base. Water gushed from the spouts in the shape of lions’ heads. Cups hung from chains over the basins, so that the locals could have a drink. At that time people were poor and had no running water in their homes. The fountain was probably also used as a watering trough for horses to have a drink as well.

Some people think that the name “five lamps” comes from the five streets which meet at this point; others believe that they commemorate five major battles fought in India during the days of the British Empire.

But I know more than I did before. And someday I can learn about the Five Lamps Tavern and possible connections. 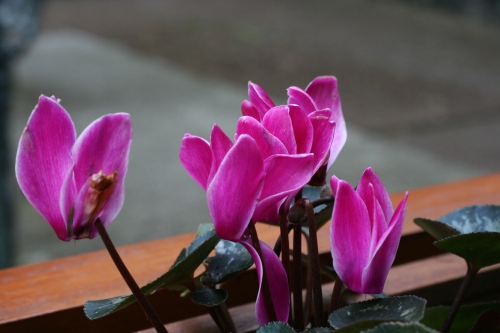 On our final day in Dublin,
for this trip,
we visited St.Stephen’s Green
where we saw ducks,
busts of Joyce and Markievicz
a Boer War arch,
a statue of Tone,
reminders of the Famine,
and purple flowers.

After the wedding, we visited the Dublin Zoo.
It was cold.
It was cloudy.
We did not stay all day.

But we had a good time.

And there were purple flowers,
including these with their
little yellow helmets. 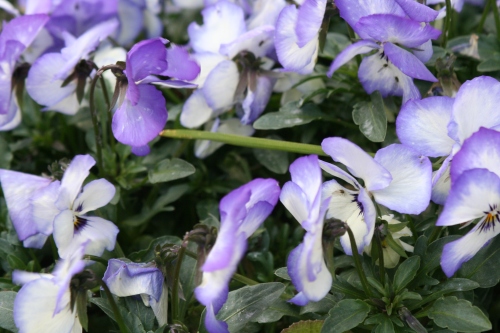 We arrived at the
Garden of Remembrance in Dublin
almost a year
after Queen Elizabeth II,
our visit a bit less historic.

No wreath we brought,
still flowers greeted us
as we remembered
past people and events,
as we reflected on
courage and freedom,
and the costs of violence,
and the possibilities of nonviolence.

While in Dublin waiting for
Roja and Joel’s wedding,
I visited Dublin Castle with
Tricia, Bruce, Nancy.

There I discovered,
artfully disguised as
miniature purple rabbits,
the guards who stand watch
over the Dubhlinn Gardens.

In the Castle’s shadow,
by the Chester Beatty Library,
eels entwine:
Veronica Guerin is remembered;
members of An Garda Síochána
killed in the service of the people are honored;
and purple flowers grow.

Our quest to hear traditional music took us to several stops. The first evening we heard but two songs. The second, in Belfast, we heard a duo. They covered a number of songs by Christy Moore. They covered Dylan. They played well. We enjoyed the music. But it did not fit the bill of traditional.

Tricia and I had another round as we waited. And the music began. Traditional. Soft. Sweet. Wondrous. We listened for an hour or so before we decided that the time had come for us to return to our hotel. I made a trip to the men’s room before we did so. On my way back, I looked above our seats. There I saw, present all the time but unnoticed until that moment, an expression of solidarity: 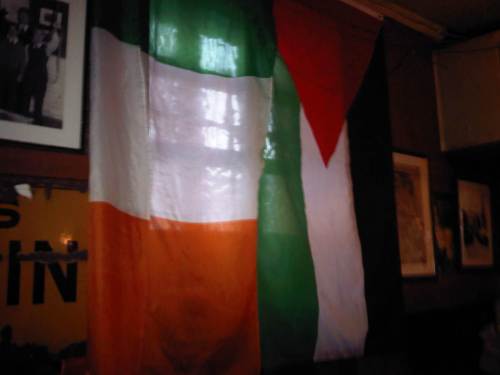 The Trail has recently taken Tricia and me on a quick trip to Dublin, other parts of Ireland, Belfast, and some of the region around that city. Perhaps quick is not the right word to use, the trip did last most of ten days. But many places remain unseen, calling for a return visit.

The wedding of two friends led to this trip. I have already posted about that joy-filled event: a reflection on a party before the wedding and some notes on the sermon. Here’s one more. Others may follow. This picture of my friends with her mother and sister has received many positive comments on Facebook: