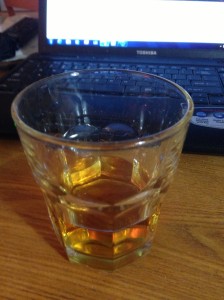 He worked as the assistant superintendent for the Grove City Public School system. But he was a musician. He played string bass in the pit orchestra for the high school musicals. He directed the Scots Fusilers – a town band. He was a tennis player. He was a photographer. He was a private pilot.

On January 28, 1974, he climbed into a small plane with another educator from Grove City. Their destination was Harrisburg where they would advocate for funds for the school system. They had tickets on a commercial airline, but decided that he would fly.

They did not arrive.

The plane went down near Emlenton. The crash site was not located until the next day.

When he died, I was in Europe with the Westminster College Choir. I could no more sing then than I can now. But my family appreciated the value of travel and found the funds for me to go.

I arrived at JFK on Wednesday of that week where family members met me and broke the news and broke my heart.

Tonight, 39 years later, I raise a glass to his memory … to the time, the far too short time, we shared. To all I learned. To laughter and to tears. To music made well and badly. To tennis matches. To a trip to Philmont.

I raise a glass … to my father.

One response to “To my father”