Churches across the world invited to pray for Korean reunification

The international ecumenical community has invited churches and individuals to join in prayer for the peaceful reunification of the Korean Peninsula on August 13. People of any faith or no faith may join.

On 13 August, churches across the world are invited to show solidarity with Korean churches by joining a “Sunday of Prayer for the Peaceful Reunification of the Korean Peninsula.”

The theme for the prayer is based on Romans 14:19: “Let us then pursue what makes for peace and for mutual upbuilding.” The day of prayer occurs two days before Liberation Day in Korea (15 August), during which people celebrate Korea’s liberation from Japanese colonization.

The joint prayer was prepared by the Korean Christian Federation (KCF) from North Korea and the National Council of Churches in Korea (NCCK) from South Korea.

“The prayer is an important part of our growing movement to overcome the antagonism that divides the Korean Peninsula and continue to open interaction between communities, churches and people,” the letter reads. “We believe churches across the world can, through prayer, help foster an environment in which peaceful reunification of the Korean Peninsula can flourish.”

Tomorrow – February 16 – join in prayer for our brothers and sisters in South Sudan. The Episcopal Church, the Reformed Church in America, the World Communion of Reformed Churches, and the Presbyterian Church (U.S.A.) are among those calling for prayer.

“The ceasefire that went into effect in South Sudan on January 23 provides a sign of hope,” noted Parsons. “Our brothers and sisters need our prayer and support as they seek to move into a future of justice and peace.”

South Sudan achieved independence in 2011. Violence erupted in the new nation in December 2013 after a political dispute between President Salva Kiir and his former deputy, Riek Machar.

The conflict resulted in many deaths and a severe humanitarian crisis. More than half a million South Sudanese have been forced from their homes. The UN High Commissioner for Refugees reports that, as of January 31, some 770,000 people have been displaced—646,400 within the country and 123,400 outside.

The call provides a sample prayer and ideas for action:

Gracious God, we lift before you the people of South Sudan who seek to create a new future after a period of violence. Three years ago, we rejoiced with our sisters and brothers as they voted for independence and became the world’s newest nation. Over the past months, our hearts were heavy as a deep conflict threatened to destroy all for which they have strived. We mourned with those who lost loved ones in this unrest, with the children and adults who have become traumatized again and again, with those who are injured, imprisoned, and hiding, and with those driven from their homes. We give thanks for the ceasefire, but we pray for our brothers and sisters as they face the tasks of building a future together. God of reconciliation, we ask you to send your Spirit of unity and peace to guide the people and the leaders of South Sudan from violence and into the paths of peace and justice. We pray for our partners in the Presbyterian Church of South Sudan, the South Sudan Evangelical Presbyterian Church, RECONCILE, the South Sudan Council of Churches and Across; may they feel your presence with them. Strengthen them with the power of your Holy Spirit as they witness to the strong love of Christ, advocating for peace and justice in a situation that is only hopeful because we follow a resurrected Christ. In whose name we pray, Amen.

In addition to prayer, we encourage Presbyterians to:

May the people of South Sudan soon know justice and peace. 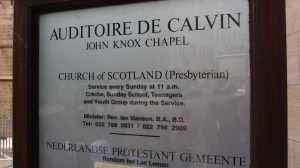 Interestingly enough, many peoples and places, nations and races were present in the congregation. The presence of the Executive Committee of the World Communion of Reformed Churches enhanced the diversity – but it was already present.

A small puddle of orange

That was the color of the cards.

The Executive Committee of the World Communion of Reformed Churches is meeting in Geneva. They started on May 5.

In their discussion, they use a consensus model that involves showing cards to indicate support for or dissent from a matter under consideration.

Orange is good. It represents support. Go for the orange!

The Presbyterian Ministry at the United Nations also represents the (WCRC) at the UN. Ryan and I wrote a report of our work and I was asked here to present it. After some travel misadventures in New York, I arrived this morning (Geneva time). This afternoon (Geneva time) I fought off jet lag and made the report.

In a bold move, I asked a question of my report.

Then moderator asked if people supported the report.

And a sea of orange cards appeared.

Well maybe more of a small puddle since there are only 40 or so members.

But all the cards were orange!

And then they clapped.

Over the next few days, we will explore together how to deepen and expand this partnership. Tomorrow starts with worship at the Church of Scotland in Geneva. We are staying in the John Knox International Center so that seems fitting.

See you along the trail!