A stay of execution for Richard Glossip

Ask Governor Fallin of Oklahoma to grant Richard Glossip a stay of execution. I signed a petition asking that tonight. You can too.

I would also affirm:

And absolutely I believe:

I oppose the death penalty because human infallibility and the racism and classism endemic to our justice system make the it possible, maybe even likely, an innocent person will be executed.

Richard Glossip may be an innocent person. The state of Oklahoma plans to execute Richard on September 16. Sister Helen Prejean and many others believe he is innocent of the crime for which was convicted.

Early on January 7, 1997, Barry Van Treese, owner of the Best Budget Inn in Oklahoma City was beaten to death with a baseball bat. It was a brutal, heinous crime. I grieve for Mr. Van Treese and those who loved him.

Richard Glossip was convicted of murder after Justin Sneed, the man who confessed to the killing, claimed Richard had hired him to do it, despite a ulack of evidence. Sneed got a life sentence in a medium-security prison, while the self-serving testimony that saved Sneed’s life sent Richard to death row.

Other actions you might take, suggested by both Sister Helen Prejean’s ministry and the National Coalition against the Death Penalty:

Join me in asking Governor Fallin of Oklahoma to grant Richard Glossip a stay of execution.

Clayton Lockett died on Tuesday, April 29, 2014. He died in a botched execution by the State of Oklahoma.

The National Coalition to Abolish the Death Penalty reports that “witnesses say he writhed and twitched in agony throughout the execution.” A second execution scheduled for later that evening, has been postponed for fourteen days.

Lockett was sentenced to death for the murder of Stephanie Neiman. The incident that lead to her death was exceptionally brutal. It involved sexual assault and assault on Neiman and on Summer Bradshaw and Bobby Lee Bornt, according to a report in the Washington Post. While Neiman’s murder carried the death penalty, Lockett was convicted of a number of crimes committed that night.

There can be no justification, no excuses, no rationales for these actions, these crimes.

I grieve for Stephanie, Summer, Bobby Lee, and those who loved and love them. The violence which ended Stephanie’s live and violated Summer and Bobby Lee appalls me.

But I also grieve for Lockett. And his death appalls me even as his actions fill me with revulsion.

I opt for living in the tension. For seeking to find ways to protect society from those who kill without killing them. And for doing the hard, at times it seems futile, impossible, work of breaking the hold of anger, hate and violence on human hearts and preventing violence. It won’t come easy. But it is my choice.

The National Coalition Against the Death Penalty has a petition calling the leaders of Oklahoma to “halt all executions until an independent third-party can carry out an investigation with full transparency.”

I will sign because I believe an investigation is crucial both to understand what happened and why and to abolish the death penalty in Oklahoma and across the United States. 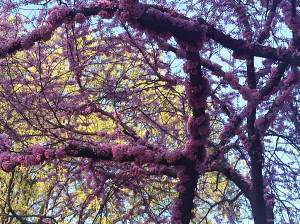 Walking to and from the Presbyterian Office of Public Witness, this intriguing tree caught my eye and the eyes of many others.

Catherine, Peng and I stopped and looked at it for a time. None of us had seen anything like it. The pink-purple flowers grow directly on the bark – almost like moss.

“I wonder what it is?” mused Catherine. I pulled out my BlackBerry preparing to do a search when, out of the corner of my eye, I noticed a small sign on the tree. “Bet that will tell us,” I said.

We walked, some of us stumbling, across the sidewalk and on to the grass where we could read the sign.

Eastern Rosebud (Judas Tree) said the inscription. That really did not tell me much. Maybe Peng and Catherine went on their way with a deeper understanding, but no insights shimmered for me. A few minutes ago, ensconced in my hotel for Compassion, Peace and Justice training day and Ecumenical Advocacy Days, I Googled and learned several things:

My picture fails to do it justice – but it points to its intriguing beauty.

Three days and three events leave me shaking my head in wonder.

On Friday, December 16, 2011, 49-year old Gary Roland Welch was taken to the hospital to receive treatment for cuts to his neck in an apparent suicide attempt.

On Sunday, December 18, 2011, he was returned to the Oklahoma State Penitentiary.

After treating his wounds, the state of Oklahoma executed Welch – the first in the United States for 2012.

Welch was convicted for the 1994 slaying of Robert Dean Hardcastle, 35, in a dispute over drugs in Miami, Oklahoma.

Reports indicate that Welch offered no apology and showed no remorse for the slaying. He maintained that the slaying was an act of self-defense. The Oklahoma Assistant Attorney General argued that forensic evidence and court testimony contradicted the claim of self-defense.

Robert Dean Hardcastle had twin sons who were two years old when their father was killed.

But I also grieve for Gary Ronald Welch and all who loved him. Whatever he did, however he felt about his actions, he too was God’s child.

I grieve that the state has again taken a life. I grieve for what that says about us – about me.

There has to be a better way.