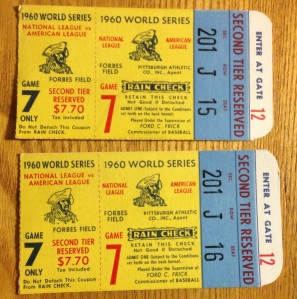 Tomorrow night, the Pittsburgh Pirates host the St. Louis Cardinals in the National League Baseball Division Series. A Pirates win captures the series for them and moves them into the League Championship series for the first time since 1992.
When the Pirates take the field to begin the game, my high school friend Lois will be there with her father.
Lois and I attended Grove City High School in Western Pennsylvania. We had many classes together, including band where she played clarinet and I played the baritone horn. Upon graduation, Lois went to Penn State. I went to Westminster. She has landed in the field of library science. I followed a call into ministry. We lost touch fairly quickly after that.
Our class celebrated its 40th anniversary last year and Lois found me on Facebook. Through that medium, we have discovered that we both still bleed black and gold. The Pirates. The Steelers. They were our teams in high school. They are our teams now.
We each shared our support for the Pittsburgh teams with our fathers. Each of our fathers worked for the public school system.
My dad was the Assistant Superintendent of schools until his death in 1974. And a very good musician. He started his career as a public school instrumental music teacher.
Mr. Thompson, Lois’ father, was our band director. And a very good musician.

Mr. Thompson and my father were good friends. As in any work situation, friendships form. There was a whole group of folks who were friends with my dad. But my dad was especially close to all the instrumental musicians in the system, Mr. Thompson among them. My father played for them when they needed help. Mr. Thompson played in the town band when my dad directed it.

My father and I went to Pirates games – along with my mother, brother, aunt, and grandfather. We made it a family affair. I know now that something similar happened in the Thompson household.

After the Pirates won on Friday, Lois sent me a message saying that she has tickets for Game 4 in Pittsburgh and that she will take her dad along. He is 87.

While that pricks my heart a little thinking of all the games my dad and I never saw, it also brings back a whole host of great memories. And I am really thrilled for Lois and Mr. Thompson. His first name is Grant but I can’t call him anything else but Mr. Thompson even after all these years.

Pretty cool. I count on Lois and Mr. Thompson to bring the Pirates home.

A word about the photo. Yes. My father and I attended Game 7 of the 1960 World Series. We lived on Neville Island at the time. Dad took a vacation day and took me out of my first grade class. We were there for the Kubek hop, for Hal Smith’s three-run home run that put the Pirates ahead in the 8th inning and for Bill Mazeroski’s game-winning home run in the 9th inning. We saw history. And the most important word in that sentence then, and now, is “we.”

Why I like New York 5 – Tubas, ‘bones and baritones

The sun shone as I crested the top of the stairs from the subway station at 125th and St. Nicholas. I had taken but a few steps when I heard drums. Cadenced drums. A drum line.

At 124th and St. Nicholas I saw them, waiting for the light. Drummers, young women with batons, and a band. When they started to play, I realized all the instruments were brass. When they began to march, I saw they were all low brass – tubas, trombones, and baritones.

I have no idea of who they were or what they were doing, but memories of the Grove City High School marching band washed over this old baritone player as the band marched me to Morningside Avenue.