Anguish grips my soul as events unfold in Gaza.

I am cautiously grateful for the cease-fire announced today. I have prayed for peace; now I pray the negotiations will succeed.

I have called on Congress to act for a ceasefire in Gaza and to pursue a lasting peace in Israel-Palestine.

I have contributed to UNRWA to support their work caring for Palestine refugees in Gaza. There are a number of other agencies responding to the needs of Palestinians and Israelis. 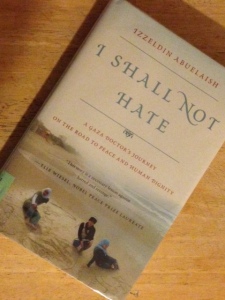 I also read Izzledin Abuelaish’s book, I Shall Not Hate.

On January 16, 2009, Israeli shells hit Abuelaish’s home in the Gaza Strip. The devastating explosions killed three of his daughters and a niece. A Palestinian doctor, Abuelaish writes of his experience and his refusal to turn to hate and revenge. Faced with heartbreak unimaginable, he called for the peoples of the region to talk to each other and to build relations with each other that could serve as the basis for efforts that might lead to a just peace. Abuelaish lives his call.

As bombs and shells fell on Gaza; as rockets struck Israel; as Israeli tanks rolled and Israeli troops marched; as Palestinians emerged from tunnels; Abuelaish’s words carry a powerful poignancy and a deep urgency.

We use hatred and blame to avoid the reality that eventually we need to come together.

Hatred is an illness. It prevents healing and peace.

Peace is humanity; peace is respect; peace is open dialogue. I don’t think of peace as the absence of anything that just puts it in a negative light. Let’s be positive about what peace is–rather than what it is not.

We do not need to merely accept what is happening around us. We all have the potential to be agents of change.

I believe that Einstein was right when he said life is like riding a bicycle: to keep balanced, we must keep moving. I will keep moving, but I need you to join me in this long journey.

I give thanks for Izzeldin Abuelaish and all who keep moving on the long journey to justice and peace in Gaza and Israel and places around the world. I pray for the courage and strength to keep moving with them.