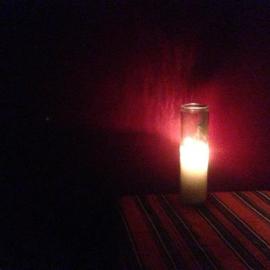 The news crossed my Facebook page early this afternoon. People in Ohio and in India called for a worldwide blackout and candlelight vigil as a witness for an end to rape – for today – January 26 from 6:00 – 9:00 p.m. T.V.N. Clutch, India, the Ohio Alliance to End Sexual Violence, and the National Alliance to End Sexual Violence sponsored the event.

The word came to late for me to organize participation with anyone else. So I spread the word as widely as I could on social media. And from 6:00 – 9:00 p.m., I turned out the lights and lit candles. It was a tad disorienting. But for those affected, the experience of being raped is more than a tad disorienting.

In the silent darkness, I reflected on how rape is not only a violation, but a means to control. I grieved. I prayed. I pondered what I have done, what I have failed to do, and what I could do. I took a picture of one candle and shared in on Facebook, using my phone, not my computer.

As I turned the lights back on, one of the first things I did was to send  a message to my Senators asking them to co-sponsor the Violence Against Women Act. While not the only piece, this legislation represents an important part of the effort to end sexual and intimate partner violence that violates women, and some men, and shames us all.