People who visit New York sometimes bring such uninhibited enthusiasm. It makes me wonder if what happens in New York, stays in New York. 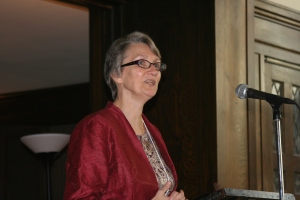 My week began in Chicago where Tricia received the Distinguished Alumna award from McCormick Theological Seminary. Thanks Sung Yeon for the photo of Tricia accepting the award!

My return flight took me through St. Louis – a perfectly logical flight plan, right? I boarded in St. Louis and found a seat. A group of five women followed me onto the plane. They took five of the seats across the aisle.

They talked. Loudly. Lustily. Happily. They appeared almost giddy. They were going to New York and they were pumped.

Enthusiasm for their visit to New York surged out of them like a flood bursting a dam. It washed over everyone who could hear them. That probably included everyone on the plane and some people out in the waiting area. We were bathed in their excitement for their visit to the Big Apple.

Again and again, I see people on planes bound for LGA with similar reactions. There is something – something – about New York that can draw that enthusiasm out of us as few places can.