View from the front of the train 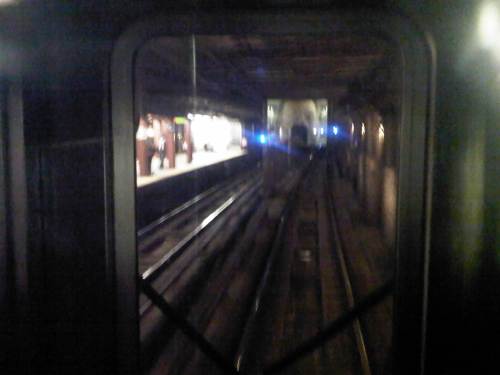 I had never been there before –
not that I have all that much experience,
but I do ride the subway regularly –
I have done so since I have been in New York.
I prefer it to the bus
or even a cab (unless I am carrying a lot of stuff).
So that’s kind of often,
yet not all that much,
but nowhere in those trips,
however many,
however few,
have I ever done
what I did today.

On a homeward journey,
I hurried down the steps in Grand Central
to find, sitting in the station, a number 3 train –
clearly about to depart,
nonetheless prepared to receive boarders.
I did. Into the lead car, I slipped.
The doors closed, and were caught
by a privileged child with his umbrella and a sneer.
They reopened and a number of travelers poured in.
They drove me, gently I admit,
but relentlessly drove,
to the front of the train. The very front.

Never having been there before,
a moment passed before I realized the view;
when I did, it grabbed me; I became entranced –
watching red, blue, green, white, yellow –
flashing colors of light,
girders blurring on the side,
the track disappearing under the train.
I moved closer to the window;
watching a fantastic world,
only tearing myself away
from the view at the front of the train
when I feared I would miss my stop.