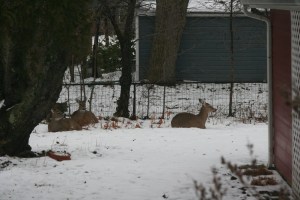 Slept in again. That is getting to be a habit. I am getting to like that habit. Of course I stay awake until two or three in the morning. This will all have to change.

Upon rising, I did some email follow-up related to EAPPI, Red Hands, and transferring my membership to the Presbytery of New York.

The animals of the day were deer. Three doe showed up in our back yard (although Tricia was awake early enough to see turkeys again. The doe stayed there a long time, settling in for what appeared to be a nice rest.

Watched a variety of football – no one game in its entirety but saw bits and pieces of Army beating SMU, North Carolina beating Tennessee, and Syracuse beating Kansas State. Now watching Washington and Nebraska. They had played once before this season. Tonight is a different story, at least so far.

Went to see Voyage of the Dawn Treader. It seemed good enough but those who know the book did not like it. I can see their point – the movie not only changed things, it watered things down quite a bit. Not sure if we will go see other movies made from the Chronicles of Narnia.

After the movie went to dinner at Tommy’s – always a treat.

The day also saw a failed quest. Of course it was a completely unimportant, inconsequential quest. I have had a yen for the last several weeks for Wedding Cake cookies by Archway. True, they are not great cookies – crunch shortbread, some nuts, a ton of powdered sugar. But I have always liked them – and I have not been able to find them this year – at least not in Louisville. I went to three different grocery stores in Cleveland Heights and South Euclid and came away empty. Oh well. Some day. Some where. I will find them again.